Something Wicked This Way Comes

Ray Bradbury’s seminal American folklore tale, Something Wicked This Way Comes, embodies everything I love about the Halloween season. October is a month of mysteries and transition, of brilliant autumn colors and the odor of burning leaves. As the main character’s voice over begins to reminisce over the events that took place during this particular autumn, we’re eager to come along with him and compare his memories to our own. The account of Will Holloway and his friend Jim Nightshade may be Walt Disney Studio’s darkest tale, but it contains a tremendous amount of heart.

The Autumn People sweep into little towns and feed on the dying dreams and ambitions of the folk who live there. They bring promises of riches and youth, women and prosperity, but deliver only horror and enslavement. Our young yet wise heroes discover the sinister undertones of Darks Pandemonium Traveling Circus and find themselves in mortal danger from a foe wielding powers far beyond them. 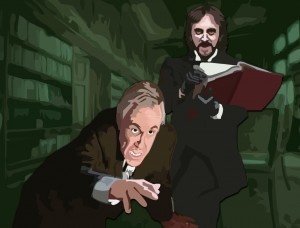 Will’s father, the town librarian, is very old for a father of such a young boy. He cannot do things that many adolescent boys pine to do with their fathers, like play touch football or go on camping trips. However, Will’s dad possesses great wisdom and life experience. Most importantly he has the fortitude to make a great sacrifice for his family and to stand up to those who would prey upon his deepest fears and insecurities.

The artwork here is depicting a thrilling scene from the film, in which Charles Halloway, played by Jason Robards, is confronted with a terrifying choice; to give up his son in order to reclaim his own youth, or to taste the bitter venom of his own mortality. Jonathan Pryce gives an unforgettable performance as Mr. Dark, who wields a witchcraft power over time and death itself against Halloway; tearing years out of the librarian’s life like pages out of a book. Despite this vicious attack, the magnitude of the librarian’s love for his child triumphs over Dark’s sinister proposal; but at what cost? 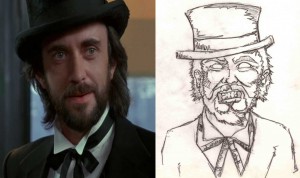 I decided to go with a more comic-book feel for the look of the featured art. My thinking was that the artwork should be just as easily attributed to Ray Bradbury’s classic book as the Disney film that introduced me to the story as a young boy. However, Jonathan Price looks amazing in this picture so there was no way I wasn’t going to emulate that appearance. To your right I’ve provided a look at the image I used as a reference for my original pencil sketch.

“Your torments call us like dogs in the night. And we do feed, and feed well.”

As a child I had a very low threshold for frightening stories and images. My parents, being Baptists, would often restrict my viewing choices. I was very sheltered for quite some time, and it took a great deal of rebelling before I was given the leeway to make my own entertainment choices. Therefore, I have Disney Studios to thank for providing me with the entertainment of my very first Horror film. Images of spiders attacking my bedroom, or being pursued by someone like Mr. Dark haunted my dreams for many years, but it taught me how exhilarating the nightmares fueled by cinematic villains can be.

Something Wicked This Way Comes has yet to receive the High Definition treatment from Disney Home Video, so no Blu-Ray edition yet. However, the DVD has a very nice anamorphic widescreen video transfer and an original theatrical trailer. The disc also has a Standard Screen format version of the film for those that are still watching films on a standard def television.

From myself, and the first horror film I ever saw, Something Wicked This Way Comes,

Links to the DVD, Novel, and Soundtrack are provided in the box below. (Unless you’re blocking Amazon Associates)

2 Responses to Something Wicked This Way Comes