A movie like Time Bandits is only possible when minds are allowed to soar, and Terry Gilliam is a bona fide big dreamer worthy of paying very close attention to. The motives of adult characters in this film are hysterically pedestrian, and Gilliam satirizes their petty and selfish ambitions from the very beginning. Kevin, our child hero, anchors our sense of intelligence by delving into the majestic fantasies of classic literature while his mother and father obsess over kitchen appliances and game shows. His young mind is busy with imagination and possibility, but Kevin is trapped within the confines of domestic doldrums and plastic covered furniture. That is until a troupe of sleazy crooks spill out of his bedroom cabinet, trying to be sneaky, making all kind of plans, shooting off a machine gun, and ready to rough up kids to avoid getting in trouble.

Wielding the power of a time traveling map, we have a group of thieving little scoundrels who are only out for one thing, to get stinking rich! They’re dangerous and greedy, violent and ambitious, and regardless of whether Kevin is ready, he is forced to go along with them. Their obviously small stature forces the film to lower the camera and take on a more unique perspective better suited for young audiences. This makes make the world seem bigger and more threatening. Every danger seems to tower above the viewer; it’s slightly disorienting yet greatly strengthens the bond we make with the vertically challenged characters.

“Bring them into the Time of Legends.”

Time Bandits plays like something of an anti-children’s film. While we are presented with scenes that strongly appeal to our sense of wonder, we are also confronted with images that draw from our nightmares. Gilliam is clearly a disciple of Grimm’s Fairy Tales (he truly didn’t need to make “The Brother’s Grimm” to prove that), and his sense of childhood and how accurately the young mind can interpret relatively adult themes is far more spot on than any other filmmaker I can think of. Most films for children come off as condescending and pander to completely imaginary sensibilities, yet Time Bandits transcends this and rises to the status of a classic that sticks with you as you grow into an adult. 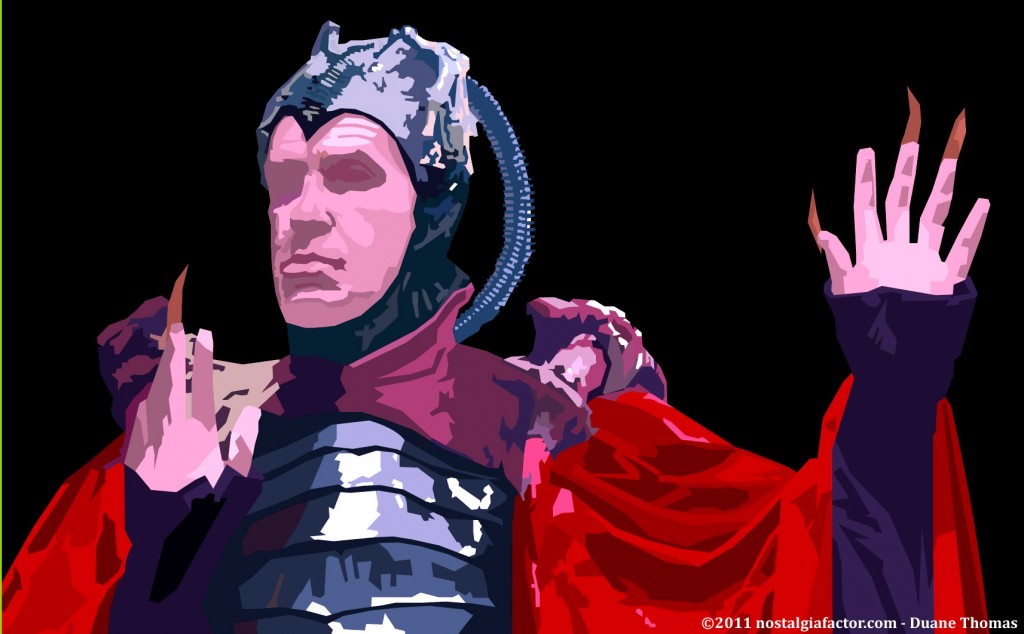 I adored this film when I was young, and fortunately it was a premium cable mainstay, running on HBO almost as often as John Carpenter’s “Big Trouble in Little China.” It seemed like I caught it nearly every time that it aired, and no matter where I came in at I always finished the film. Something about Time Bandits became very important to me; it made me feel like kids were more intelligent than the adults who never bother to explain themselves. It was also another early indication of my inevitable path toward villainy. If I wasn’t spouting Evil Genius lines at my parents, I was hoping that they would blow up like Kevin’s in the final scene. Although I loved the thieving little heroes of Time Bandits, I rooted for Evil. Given reign over creation, I would’ve started with lasers day one myself.

Most of the children’s films from my youth have fallen out of favor with me, and even in the event that I feel nostalgic for them, the sensation quickly passes after a few minutes of actually subjecting myself to them again. However, Time Bandits rises above mediocrity with a portrayal of youth that comes off as genuine, with settings and situations that most films would avoid for fear of being too frightening for children, and truly memorable characters and dialog that still appeal to me after all these years. The Supreme Being (God) in a Gilliam film is a bureaucrat who needs a child’s signature for his part in whatever mess has to be cleaned up after some unscheduled mischief, Napoleon is depicted as a theater lover who is far more obsessed with a puppet show than accepting the surrender of his vanquished enemies, and I absolutely LOVE that Robin Hood has a guy who feels it’s absolutely necessary to punch poor people in the face. What an absolute delight!!!

“Terry Gilliam is a living treasure, and we are squandering him foolishly with every film of his that remains unmade. Gilliam is a fabulist pregnant with images—exploding with them, actually—and fierce, untamed imagination. Time Bandits is a Roald Dahl–ian landmark to all fantasy films. Seeing Time Bandits with my youngest daughter just two weeks ago, I was delighted when she laughed and rejoiced at the moment when Kevin’s parents explode into a cloud of smoke.”
– Guillermo del Toro, Criterion Top 10

I didn’t know it at the time but Time Bandits was my first exposure to one of my favorite directors, Terry Gilliam. Time and again he has astonished me with the artistic integrity of his films and the sensibilities and humanity he brings to the subject matter he’s tackling. Because he has crafted so many unforgettable and richly detailed films, I will not say that Time Bandits is my favorite. However, it is very dear to me and I’m extremely proud of the fact that I had such good taste as a kid to love it so much even back then.

Links to the Blu-Ray and DVD sets are provided in the box below.
(Unless you’re blocking Amazon Associates)

This entry was posted in Art, Features, Reviews. Bookmark the permalink.
← Blade Runner
Something Wicked This Way Comes →