“For this reason above all, their capacity for good, I have sent them you… my only son.”

The 1978 film version of Superman borrowed heavily from the Christ mythos, almost as much as it did from the original DC comic book series, “Action Comics”, but the result was something magical. The cast perfectly portrays their characters so memorably that they’ve become part of the collective conscious. When we think of Lex Luthor, we rarely think of him as he was depicted in the comics or on various cartoons, but as Gene Hackman hamming it up with Ned Beatty. Most importantly, the world will always remember the legacy of Christopher Reeve when they think of our Man of Steel.

We all need something to believe in, even if just for a few hours, in order to set aside all of our anxiety and fear caused by the burden of living in desperate times. The late seventies held just as much disquiet and apprehension about economic issues and the global state of disrepair as the times we live in today. In an era of uncertainty society clamors for answers, even superficial or fanciful answers, to fill in the gaps (like Republican Primary candidates). In other words, we desperately desire a hero. Simultaneously, we vilify and dehumanize our enemies, creating a world that’s closer to the simplicity of comic books. Thus the criteria are set for the arrival of a champion, adorned in blue and red, wearing a cape, and willing to make every sacrifice for truth, justice, and the American way (all that stuff). 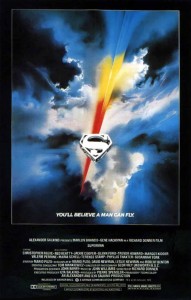 What hero complex does America harbor stronger feelings for than the Jesus myth? You know, the one where Jor-El gave his only begotten son to a world that would desperately requires his strength and guidance… Wait, I’m getting Superman mixed up with something a little more divisive and restrictive. I digress. What I’m implying is that the world was ready for a hero; it was ready to idolize an honored luminary who embodied the kind of strength that could overcome the heaviest of problems. Superman: The Movie arrived at a perfect point in American history, and the distraction it provided from our misfortunes also instilled a sense of childlike wonder.

In the mists of crisis we were presented with a champion who lived by a just set of rules and would never lie or let us down, no matter what. It was too good to be true, but it was also exactly what the doctor ordered, and he ordered us to flock to movie theaters, video rental stores, and licensed network television presentations. This was a good thing. Superman was the real deal, at least from an entertainment and sentimental point of view. The message and meaning behind the flying indestructible hero was a positive and therapeutic addition to the American lexicon. He represented good for the sake of good, and during the time of transition that the late 70’s presented, good seemed very alien yet most welcome. Superman was the kind of alien we were more than ready to accept into the family. 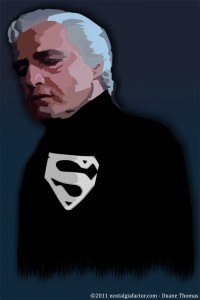 “The son becomes the father, and the father the son.”

Superman: The Movie sets the tone for the modern super hero archetype in a pivotal way that transcends even the original intentions of the filmmakers. All other hero conventions must hold up to the vision that Richard Donner brought to the screen. At the time it was practically an art film, as opposed to action movie, beginning with something completely off world and unsettling, that didn’t even explain itself until the 2nd Superman movie. At first we are met with Jor-El, commandingly portrayed by the legendary Marlon Brando, firmly controlling an otherworldly courtroom and condemning a trio of villainous traitors to some kind of eternal torture we “humans” have little understanding of. How essential this off-putting prologue to our story was didn’t even hit me until recently, when I began to realize the strength of bringing such respected actors as Marlon Brando and Terrance Stamp into such absolutely alien territory. We follow them like leaders into the abyss of a surreal set of alien normal’s, and thus believe it and therefore concreting the origins of our hero as both Godlike and somehow believable.

Try to step into the shoes of a theatre audience member in the year 1978, which to some degree had not yet been presented with the visual story mechanics that we’re used to today, and imagine the opening sequence of Superman playing to those weary eyes. Marlon Brando anchors us to something that would otherwise be comically alien with his flawless performance of a father, resigned to his fate, but completely unwilling to allow that fate to seal his own son’s doom as well. Superman’s mother humanizes the situation further by worrying over how different her child would be from his own contemporaries on Earth.

The artwork for the post was created using vectors and gradients. Each color segment of the face and body was mapped out and then carefully filled with a color gradient in order to achieve something of an oil painting look. The image to the left is a snapshot of the work in progress and should provide an example of how this look was accomplished. It’s a bit of a time consuming process that I taught myself while working on my forthcoming Star Wars feature. I like how this artwork turned out, but I don’t think I’ll adopt it as my official style. 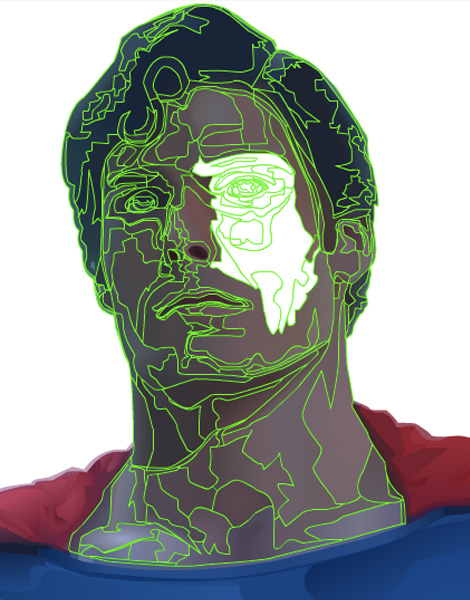 Clark grows up in Smallville, America, where life is slow and pedestrian; a stark contrast from his other worldly origins. There he not only discovers his powers, but the importance of keeping them secret, and the limitations and value of this fragile human existence. He’s not just raised in Smallville, he becomes human and one of us there. In very little time the filmmakers skillfully establish not only his maturity, but the gravity of Superman’s destiny. We’re assured that this character of limitless power is one of us now and would never betray us; he’s worthy of being our savior.

Blending in to big city society, here presented as Metropolis, the “every city”, is just as awkward for Clark as it is for any of us, further strengthening our attachment and suspension of disbelief. This isn’t a character who simply possesses Godlike abilities, this is a human brother who shares our concerns and daily troubles; he understands us, and lives among us, he’s simply special, like all of us seem to think we are. Therefore, we accept him as our protector and champion. 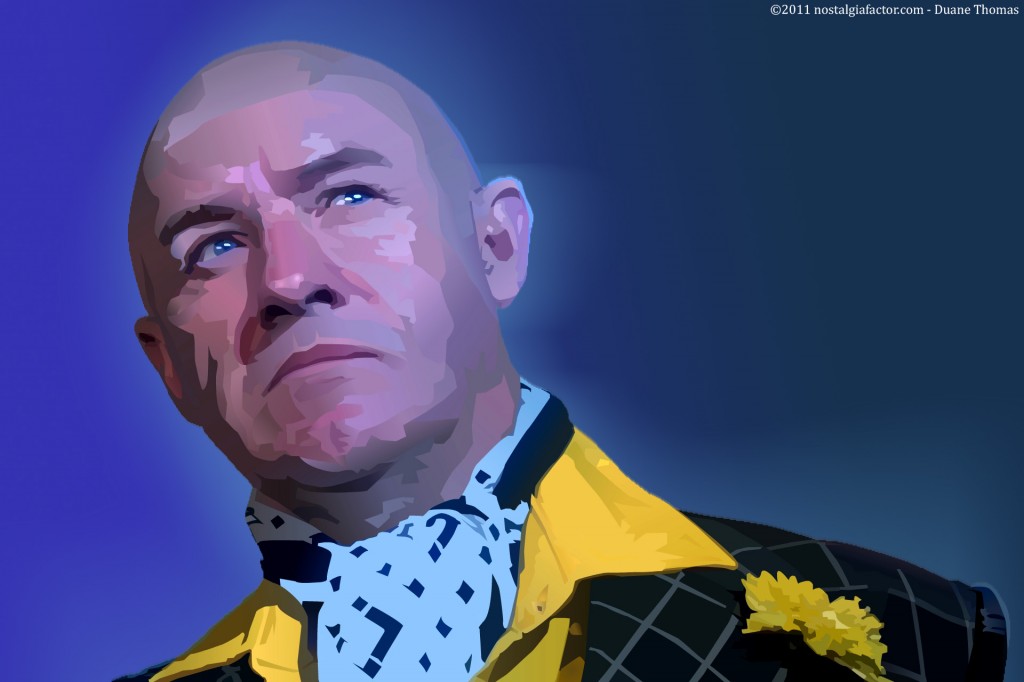 “It’s kryptonite, Superman. Little souvenir from the old hometown. I spared no expense to make you feel right at home.”

Gene Hackman’s Lex Luthor is as hammy as he is sinister and conniving, and his excellent sense of fashion informs us of his yearning to be an aristocrat. Personally, I’m in awe of Hackman’s performance, and consider the character to be among the very best criminal geniuses to ever grace the screen. Planning to take out most of the western seaboard just to create new beachfront property is a dubious scheme that most Bond villains would truly appreciate, but few would have been able to concoct themselves. Luthor here is so adept at deception that he knows instantly that Superman is the real thing, because no one besides himself could have ever perpetrated such a fantastic hoax, and of course knowing that Superman is the real thing necessitates destroying him. It’s simply poetry to my ears.

Although I usually balk at comic relief characters in movies, Otis has a special place in my heart. Ned Beatty’s sense of comedic timing and facial expressions catapult the character to the upper stratosphere of evil henchmen and malcontent sidekicks. Furthermore, the theme song that John Williams composed for Otis just fucking kills me. If I had that music following me everywhere I went, I would consider it my duty to knock shit over and trip over random objects, awkwardly somersaulting into priceless artifacts that can never be replaced; always jumping up and adjusting my hat like I’ve done nothing wrong. Those tubas give the song such perfect punctuation to the way Otis walks around and carries himself that I can’t help but love the character.

“I’m here to fight for truth, and justice, and the American way.”

Although Superman: The Movie features the most powerful and selfless fictional hero ever, the man who wore the costume became a real life hero and role model. Christopher Reeve suffered a catastrophic cervical spinal injury while practicing for competitive horseback riding in Culpepper, Virginia. The injury left him paralyzed from the neck down and Reeve underwent months of agonizing surgeries and rehabilitation. There’s no doubt in my mind that lesser men, myself included, would have given up, but Christopher Reeve had a competitive spirit and the heart of a champion. Once stabilized he channeled his efforts to help others with spinal cord injuries, and using his celebrity status he became a leading activist for spinal cord and stem cell research. He and his wife founded the Christopher and Dana Reeve Foundation, which provides funding for spinal cord research and advocates on behalf of those surviving with debilitating injuries. Although he passed away in October of 2004, Reeve continues to give hope and impart inspiration to people who need it most. Christopher Reeve is much more than an actor who portrayed Superman, he literally became a real super hero.

Superman inspires us to be better, do better, and to reach toward our potential. He is a symbol of peace and strength, wisdom and invulnerability. We like him because he is stronger than we are and can do so many extraordinary things, but we love him because he is more honest and somehow more human us. Superman was already part of the main stream vernacular before this film was released, but what the filmmakers and actors brought to life in 1978 was legendary, and a place for Superman was cemented into our collective consciousness forever.

Links to the Blu-Ray and DVD sets are provided in the box below. (Unless you’re blocking Amazon Associates)

9 Responses to Superman: The Movie