“I swear to you, from this moment forth, I’ll never lie to you again.”

As volatile as it is endearing and captivating, True Romance is a glorious movie about reckless youth and impulsiveness. This is a film, more than anything else, about unadulterated pure love; the kind of love that breaks through impregnable walls and burns through the lies we tell each other. However, don’t be fooled by my magniloquent description, least you fall victim to a shotgun blast to the face. Although it may have one of the most flowery titles in all of cinematic history, True Romance revels in the old Ultra-Violence. Oh, and did I mention that this film was penned by a young Quentin Tarantino, still unspoiled by his well deserved rampant success?  His voice shines through not only in every clever piece of dialog, but the story telling themes he built his name on got their start right here. This is a film bursting at the seams with so much raw talent and charisma that it almost shouldn’t exist, but it does, and the final product is so outstanding and timeless that it’s practically unbelievable. 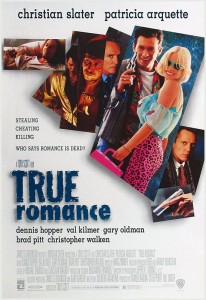 The fact that True Romance happens to be one of the most improbable examples of films with an insanely talented ensemble cast gets lost in all of their extraordinary performances. This is such an easy movie to fall into and stay excited about. It seems like every scene reveals a new titan from the world of acting, playing roles that will follow them forever as memorable and unforgettable; from Gary Oldman, one of the most critically acclaimed and well respected English actors living today, completely disappearing into a dreadlocked Detroit pimp; to Val Kilmer sneaking stealthily into the subtext as Elvis, representing Clarence Worley’s cool and collected self-conscious; to Brad Pitt in an early role as Floyd, expertly portraying an incompetent stoner roommate wasting away on the couch.  Each of these characters and performances frames the whirlwind love affair between two impulsive young people, portrayed by Patricia Arquette and Christian Slater, flying by the seat of their pants and living on a prayer.

“What is of major fucking importance is that I believe you.” 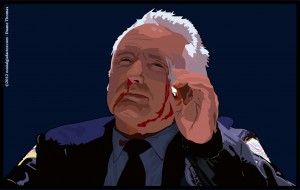 It doesn’t take long for this film to set its tone and pace as violent shootings punctuate obscure pop-culture references and stylish exposition. Shortly after skipping town in a purple Cadillac with a huge briefcase full of a connected gangster’s cocaine, Clarence’s father receives a visit from the men looking for that valuable suitcase. Christopher Walken lays down the law of God on Dennis Hopper in one of the most impressive and outstanding displays of acting chops that has ever been displayed on the silver screen. Just to let you know, if you ever think you’re the guy who gets to kill Dennis Hopper, he’s going to tell you to go fuck yourself in the most painfully obvious and personally offensive way he can devise. Mr. Tarantino, you have written many great scenes, but this one is my all-time favorite, and it’s absolutely fitting that they filmed such revered actors to perform this material. What was brought to screen involves not only brilliant writing, but also intuitive and gifted acting.

True Romance mixes serious violence and profane dialog with set pieces of brilliant situational comedy. It’s a film that keeps you on your toes and makes sure that you don’t have the time to blink. Bronson Pinchot delivers one of the more humorous performances with a character named Eliot that both moves the plot forward and selectively breaks the tension that is otherwise building toward a fireball explosion. Pinchot’s resigned delivery of his character’s unfortunate circumstance lends itself brilliantly to a mixture so fraught with unpredictability and anxiety that the entire film might otherwise be off-putting. The look on his face when confronted by a traffic officer while covered in cocaine is nothing less than hysterical, but his performance following getting pinched, betraying his movie producer friend, played by veteran journeyman Saul Rubinek, and subsequently causing a nuclear meltdown in the film’s finale is unforgettable. Often time’s performances like these are forgotten, especially in the mist of such an overwhelming spectacle of blockbuster actors, but Pinchot delivers something for True Romance that shouldn’t be overlooked. 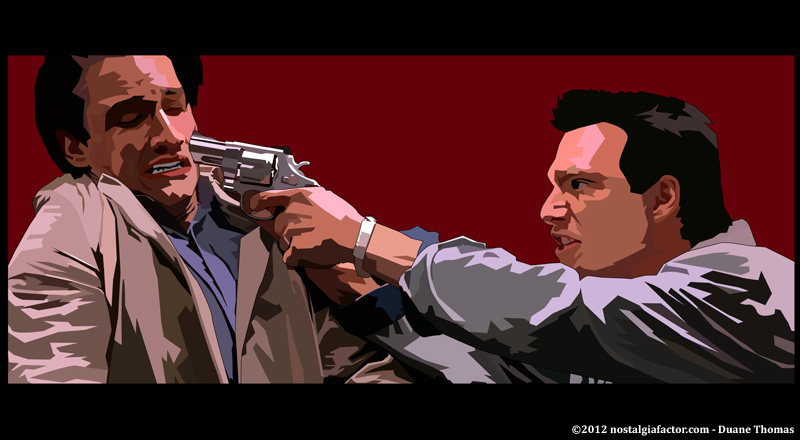 If there is one thing in film that I cannot get enough of it is strong female characters.  Patricia Arquette brought something from the heart and from the gut to Alabama Worley that sticks to the ribs, and my eternal respect for her is forever cemented. Alabama is the voice and heart of True Romance; it is her journey that anchors us to this series of unfortunate events and the miscreants who inhabit the world in which they reside. From top to bottom, this is Patricia Arquette’s movie. She owns the screen and makes you believe in this multidimensional and emotionally charged character. She has real fears, hopes, and human baggage, and she’s strong enough to carry it all while simultaneously believing in herself in a way that’s so intoxicating that it is practically euphoric.

True Romance was just released in a double Blu-Ray set with Natural Born Killers, the common thread between the two being that Quentin Tarantino wrote both films. This double set includes all of the extras the previous Blu-Ray release contained, which itself had most of the material available from the gorgeous 2-Disc DVD Special Edition. The gem special feature included on all of these discs is the commentary track by Quentin Tarantino, who otherwise has NEVER provided commentary for ANY of his own films. 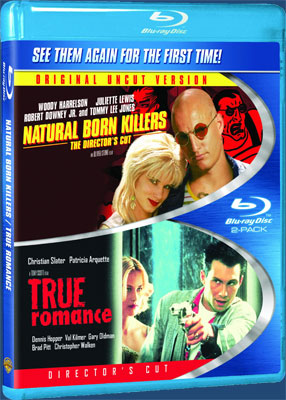 I find it impossible not to fall completely in love with both Patricia and her character, Alabama. It’s therefore simultaneously difficult and exciting to watch the scene between Patricia and James Gandolfini in the Safari Inn Hotel. This is the scene where we discover the depth of Alabama’s fortitude, lose any resilient suspension of disbelief, and completely fall in love with this woman. She rises above expectations here to provide something of a formidable foe to someone who would otherwise be as intimidating and menacing as a Sith Lord. James Gandolfini should scare the grit off bathroom tile, but Alabama stands up to him in a way that’s so impressive and heartfelt that even a homicidal maniac has to stop and admire her resilience. “You’ve got lot of heart, you know that kid?” Alabama’s beating is so brutal that it wouldn’t likely be included in any the Hollywood pictures being made today, but what makes it so great is her violent and possibly over the top comeback, and the fact that at no point did she give in to her attacker. She aggressively overcomes the mobster, and turns the tide in a manner so savage that she practically loses herself in the violence. Some of this conflict was deemed too violent and had to be cut from the picture in order to receive an R rating from the MPAA, but was subsequently reinserted on Director’s Cut video releases. 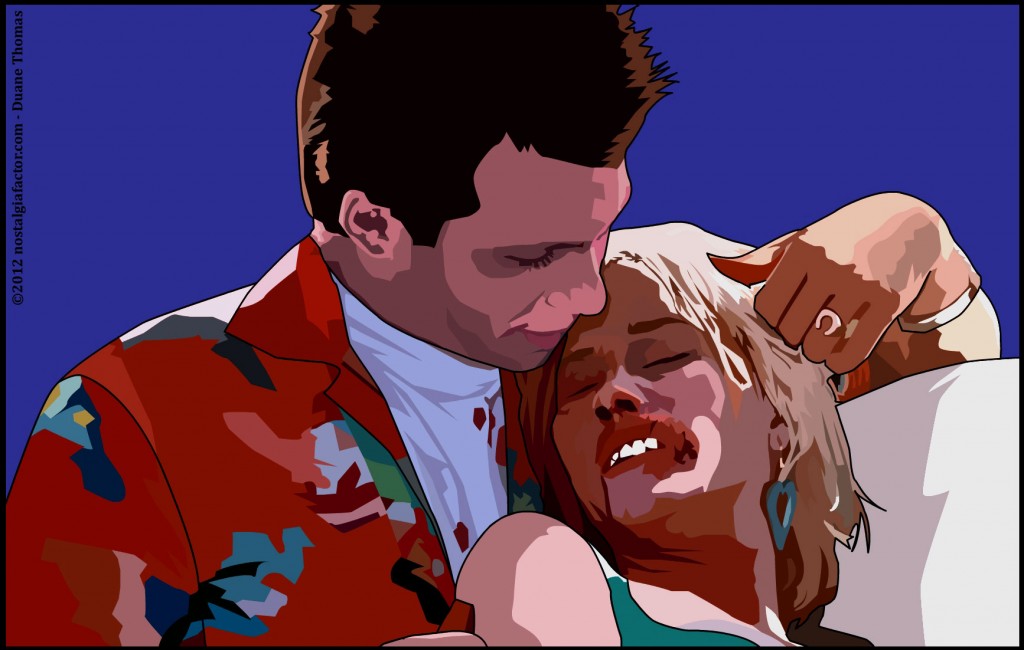 True Romance was the first script that Quentin Tarantino ever finished, and his rookie effort has aged like fine wine. The actors and creative minds behind this gem have mostly gone on to further greatness, making this a breathtaking snapshot in time, where Slater and Arquette were as young and impulsive as the characters on the screen, anything was possible for the careers of Brad Pitt and Michael Rapaport, Quentin Tarantino was far from a household name, and we still had the greatness of an actor like Dennis Hopper with us. The violent means in which Tarantino weaves pop culture and unforgettable characters was a match made in heaven for Tony Scott’s spontaneous and stylized visual story telling technique, and it’s easily my favorite film in Tony’s impressive repertoire. True Romance is solid gold and although it is violent and edgy, its name was far from ironic.

Links to the Blu-Ray and DVD sets are provided in the box below. (Unless you’re blocking Amazon Associates)